Have a question and can’t find the answer here? Let us know!

Iredell County School Bond:  Through site consolidation and expansion of classroom/programming space, ISS and MGSD will address overcrowding at existing facilities and will accommodate the continued growth our schools have been experiencing.  More importantly, some of the schools in both districts are in such a poor state of repair that they are actually unsafe for students.  Notably, Cool Spring Elementary School and Mooresville High School are in need of significant renovations and safety upgrades.

ISS has proposed projects at seven of their schools spread throughout the county.  The total cost of the proposed ISS projects is $79 million.  The projects are:

MGSD has proposed several projects at the nearly seventy-year old Mooresville HS building, which was built for 600 student, but today houses over 1,800 students.  There are several multi-phase projects and the projected cost is $40 million, more than half of this cost ($21.5 million) is for a full renovation and safety upgrades of the existing high school buildings.  The projects are:

Iredell County Community College Bond:  Bond funds would be used to build a new 40,000 square foot Health Sciences Building on the main campus of Mitchell Community College in Statesville.  This new facility will cost $12 million and will: 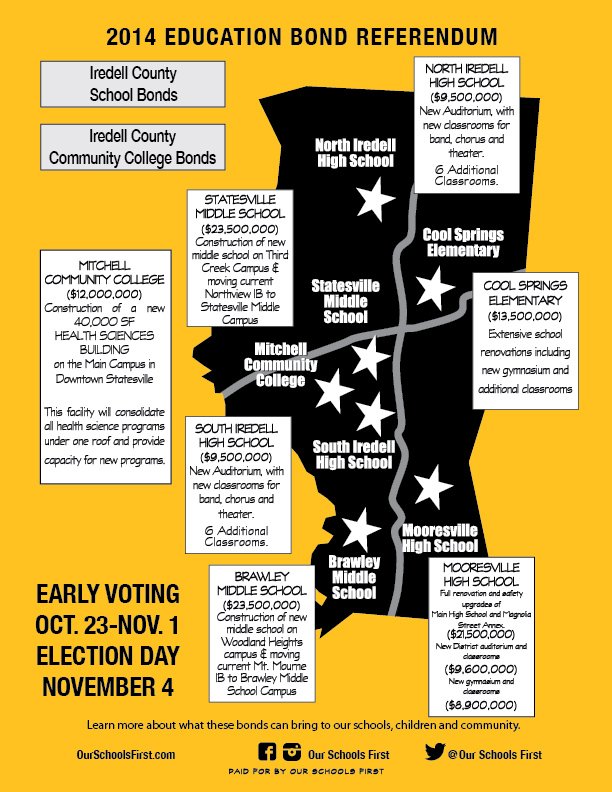 Q:        WHO DETERMINED WHAT PROJECTS WOULD BE INCLUDED IN THE K-12 SCHOOL BOND?

The Facilities Task Force determined what projects would be included in the bond. The Task Force was created to study and identify countywide construction and renovation needs at facilities for both ISS and MGSD.  The Task Force consists of Iredell County Commissioners, members of the boards of education, school district personnel, community leaders and structural engineers.  Over the course of three years, the Task Force conducted extensive investigations and studies to identify the areas of most critical concern to both districts.  The Task Force compiled the bond’s project list based on giving priority to facilities with the most urgent need, as well as safety and environmental concerns and the future academic needs of our students. This approach complies with statutes requiring that such projects be prioritized based on need, as well as statutes requiring counties to provide safe adequate school facilities that meet the educational needs of our children.

Q:        I HEARD THAT MOST OF THE BOND MONEY WOULD BE USED TO BUILD PERFORMING ARTS CENTERS, WOULDN’T IT BE CHEAPER TO BUILD PLAIN OLD AUDITORIUMS?

All three buildings are actually auditoriums, compliant with state Department of Public Instruction standards, with a combined total cost of $28.6 million, which represents only about 21% of the total bond funding ($9.6 million for the MHS auditorium and $9.5 million each for NIHS and SIHS).  Frankly, all three schools could call these facilities “performing arts centers” if they choose to.  Over the years, the nomenclature for school facilities has changed.  When some of us were students, we had school libraries, but today they are “media centers” because students do far more than just check out books today.  There are computer, video and media classes offered to today’s students to keep them up to date and competitive with students globally on 21st century technology.  Yesterday’s auditoriums are today’s “performing arts centers” because they are used for more than in-school assemblies, awards ceremonies and graduations.  Today’s auditoriums are at the heart of the performing arts programs in our schools, such as band, chorus, and theater, and these programs are key to offering a well-rounded educational experience to keep our kids motivated and engaged.  Call them performing arts centers, or auditoriums, but they are all just auditoriums.

Q:        WHY CAN’T OUR SCHOOLS PAY FOR THESE PROJECTS FROM THEIR BIG BUDGETS, AND WHY CAN’T THEY SAVE THE MONEY AND THEN DO THE PROJECTS?

Actually, not only do our schools not have big budgets (when you consider the number of students that are educated) but NC ranks 48th out of 50 states for per pupil spending.  Further, out of the 115 school districts in NC, ISS ranks 112th and MGSD ranks 105th in per pupil spending.  So the bottom line is, our schools in Iredell County are funded at the lowest level in the entire United States.  School budgets are for operating expenses, including routine repairs and maintenance, not capital construction projects.  Honestly, there is not even enough money in these budgets to keep up with the repairs and maintenance of all these old buildings.

School construction is extremely expensive and varies by type of school (elementary, middle or high school), and it also varies widely based on land cost.  Regardless, even if the school budgets included enough extra money to save for capital projects, it would literally take many decades just to save enough to build one school.  It’s the same principal that applies to borrowing money to build a new house—how many people build or purchase a new house with cash that they have saved?  Issuing bonds is standard practice to fund school construction in the United States, just as taking out a mortgage is standard practice to buy a house.

Q:        SCHOOLS GET LOTTERY MONEY FOR SCHOOL CONSTRUCTION, WHAT DID YOU DO WITH ALL THAT MONEY ?

There has been a lot of confusion about the North Carolina Education Lottery—the fact is, less than 30% of all lottery revenue goes to support education.  Since it’s inception in 2006, the Lottery has given just over $44 Million to Iredell County, which is split into several buckets:  1) Teachers Salaries (specifically to reduce K-3 class size), 2) Pre-Kindergarten for at risk children, 3) College Scholarships for students who qualify for federal Pell Grants, 4) Financial Aid—grants to UNC college students who qualify for need-based financial aid and 5) School Construction Projects.  Over these eight years, this averages to about $5.5 Million per year, to be split among all five buckets.  On average, Iredell County has received about $1.9 million per year specifically for school construction, but this is split between Iredell-Statesville and Mooresville Graded school districts.  Mitchell Community College is not eligible for any lottery funds for construction.

In Fiscal Year 2013-2014, Iredell County received a total of $1,856,738, of which only $1,450,923 was allocated for ISS and $405,815 for MGSD.  If the districts were able to save all the lottery money, and with zero inflation, zero increase in cost of construction and no change in the value of today’s dollars versus tomorrow’s dollars, it would take 99 years to save enough to do the projects at Mooresville High School alone, and 13 years to build a new Statesville Middle School.

Further, it is very important to note, that lottery money previously allocated to school construction can no longer be counted on for that purpose.  The General Assembly recently changed the legislation allowing them to allocate funds for “education-related” expenses rather than school construction (as was specified in prior legislation).  So these funds which had been available for school construction only, can now be used, at our legislators’ discretion, to supplement items that have been previously part of the State’s regular education expense budget.

That depends.  Ultimately, the Iredell County Commissioners will be the ones to decide how we will pay for these bonds.  Just remember, voters are voting for the bonds only, not a tax increase.  Should the commissioners decide to fund these bonds entirely through property taxes, the tax rate would increase by $0.0425 (4 1/4 cents per $100 of assessed value).  However, it is important to note that this increase is based on Iredell County’s economics today, and doesn’t take into account any economic growth between now and the time the money is needed.  In other words, if no new business and no new taxpayers come into the county over that time period the tax rate would rise by at most, 4 1/4 cents.  Any economic growth during that time period will also grow the tax base and could offset potential property tax increases proportionally.

It is also worth noting that Iredell County’s current tax rate is significantly lower than all the neighboring counties in the region.  If the commissioners do raise taxes by the $0.0425 (the full amount needed to pay for the bonds) the new tax rate would be $0.5275, which is still lower than all other counties in the region.  So, even after investing in our community, Iredell County would still enjoy the lowest tax rates in the region, as well as above average per capita income.

To put this in perspective, a family with a home valued at $150,000 could see a tax increase of about $64 per year or $1.23 per week—less than one cup of convenience store coffee!  Not only are these bonds a great investment, they are very affordable! 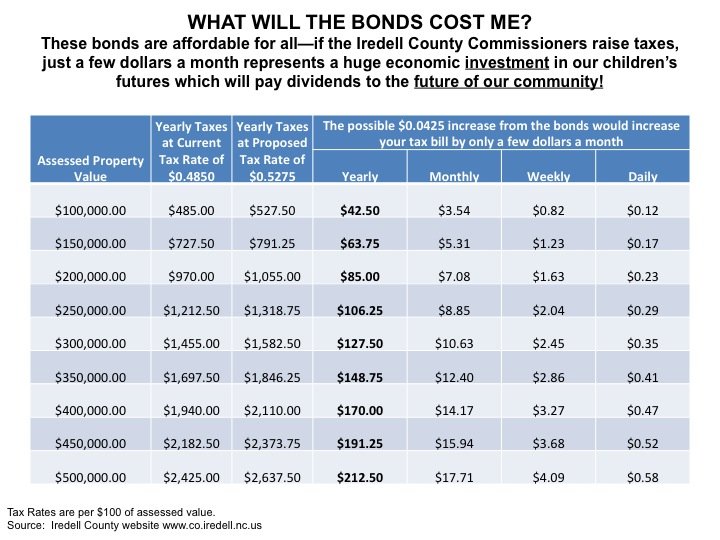 Quality schools are critical to the health of our community.  There is a direct correlation between the quality of our schools and economic growth and development, crime rate, and overall quality of life.  Good schools attract new businesses and incent existing businesses to expand.  Not only do employers use our schools as a “selling point” for recruiting employees, but good schools turnout a qualified labor force to fill jobs locally.  Local employees further help grow the local economy by spending locally (shops, restaurants, entertainment), and the cycle continues.

Quality schools provide students with direction, and a path to the future by focusing on the importance of graduating and pursuing higher education or vocational training.  Students who are encouraged to stay in school, who feel vested in their education and work toward graduation are less likely to commit crimes.  They are four times less likely to become part of the prison population, so good schools lead to lower crime rates and fewer inmates in our jails!

Quality schools aren’t only important to students and their families, they are vital to our economy.  Economic development matters to everyone in our community, regardless of whether or not one has kids in school.  A growing economy grows the commercial tax base, thereby reducing the tax burden of individual property owners.  In order to provide services to residents, the costs of which continue to grow, counties with a shrinking or stagnant commercial tax base must pass along the additional cost to property owners, or must reduce the services provided.

All these factors, which are directly tied to the quality of schools in our community lead to increased property values, and this affects everyone, regardless of whether or not you have children in our schools.  Ask any real estate professional and they will tell you good schools are key to growing your property values!

The 2014 Education Bonds have significant non-partisan support throughout the county.  The Our Schools First referendum committee is funded entirely by financial contributions from local businesses and organizations that recognize just how critical quality schools are to the local community and economy.  In addition to financial support from the business community, the education bonds have the support of:

Not to mention, thousands of tax-payers, parents and non-parents alike, who share a passion for education, also support these bonds.  Rather than seeing the bonds as a tax increase, they see an opportunity to invest in our kids, our schools, our communities and our futures.

VOTE YES!  Election day is Tuesday November 4th 2014, but you can vote early starting on October 23rd!  Remember these important dates and deadlines:

For further information, to check your registration status, find your polling place or request an absentee ballot, check out the NC Board of Elections Website at www.ncsbe.gov/ncsbe/ or Iredell County’s website at www.co.iredell.nc.us/Departments/Elections/